﻿ASSOCIATED INFORMATION REGARDING THE SURNAME AFFLECK﻿
What is today called Clan Affleck or, less frequently, Clan Auchinleck, is, historically speaking, difficult to find.  No single name or territory connected the members. They were widely dispersed and generally based on relatively small families or family groups rather than any organized clan structure.
As was the custom for a great many smaller Scottish families or clans, some of these would often attach themselves to a larger clan and thus, hopefully, assure the support and protection such a larger clan could provide. For its part, the larger clan gained both prestige due to its increased size and more warriors when they took to the field. This practice was referred to as the ‘sept’ system with the small clan or family being regarded as a ‘sept’ of the larger clan.
While exact dates for the event are unknown, the Auchinlecks of Ayrshire (Please see Site 6 on the map on the Home page) are known to have been a sept of the Douglas clan by the 14th century. Indeed, it was the Douglas’s who, much latter in the 1400s, exacted a ferocious revenge against the family Colville for their attack on the Ayrshire Auchinlecks. Similarly, the Auchinlek family centered in Angus (Please see Site 3 on the map on the Home page) were a sept of the Lindsay clan by at least by the mid 15th century. Given the wide dispersal over the Scottish Lowlands of the family name, there may well have been others as well.
Today, Clan Affleck or Auchinleck is an officially recognized Scottish clan though, as one without a formal chief, an armigerous one. It is officially associated with the Clan Lindsay though why this is so, given its considerably older association with the Clan Douglas, is not clear.
Scattered across the Lowlands, and over many centuries, there have been a number of fiefdoms of differing size held by some variation of the family name. These were located in Aberdeenshire, Angus, Lanarkshire, Renfrewshire, Ayrshire, Dumfriesshire and Kirkcudbrightshire. Today, there are no longer any Scottish estates held by anyone carrying the  Affleck / Auchinleck surname, though the reduced Auchinleck estate in East Ayrshire and the Castle Affleck located in Angus constitute the remnants of two of them. (Please see map below.) 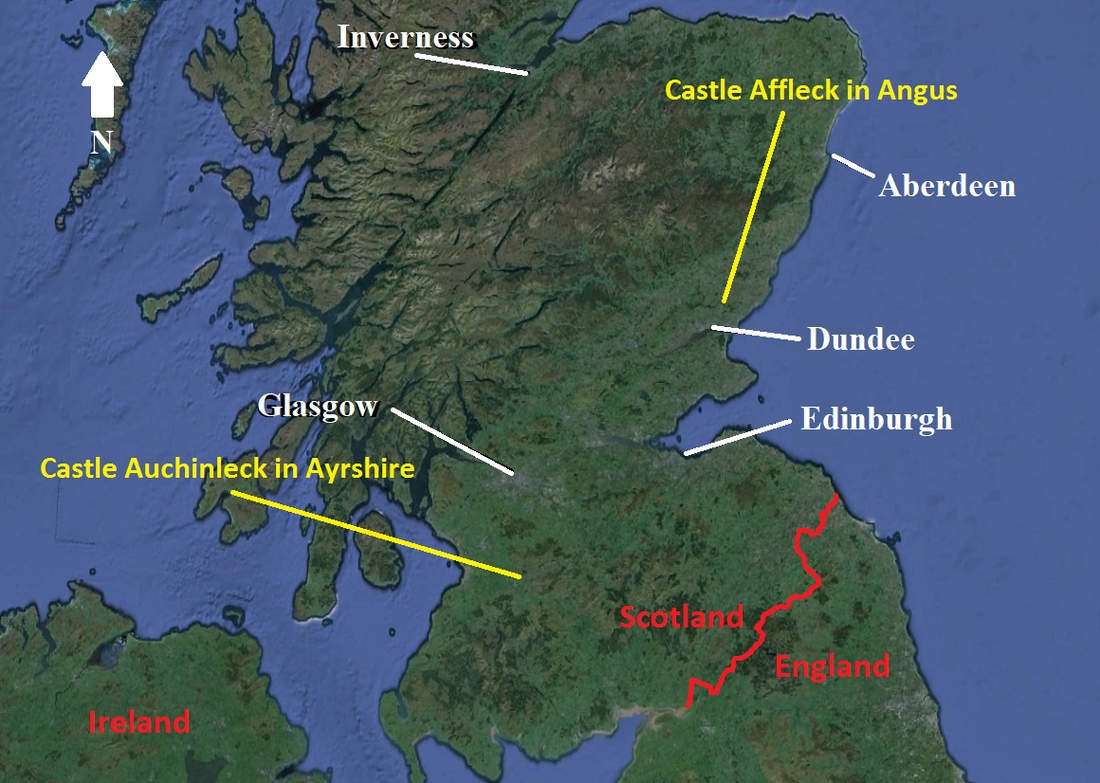